MANILA – Nationalist economist Alejandro Lichauco, 1971 constitutional convention delegate jailed for refusing to rubberstamp the martial-law agenda in the Charter, and who raised a powerful if often lonely voice against the economy’s stranglehold by global forces and cronies of the Marcos dictatorship, died at the weekend at age 87, according to IBON research group, the independent think tank on whose board he sat for many years. 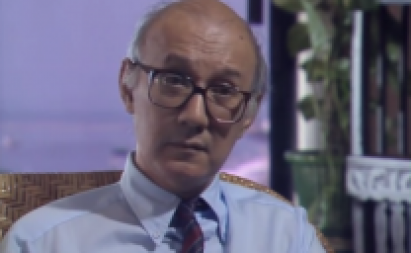 The late nationalist economist and 1971 Con-Con delegate Alejandro Lichauco, in screengrab from an interview uploaded in May 2011 on YouTube by Andrew Pearson.

A member of the 1971 constitutional convention that drafted the 1973 Charter, Lichauco was among those arrested for opposing the dictator’s agenda in the Con-con, and was among a dozen delegates who refused to sign what would be termed the “Martial-law Constitution.”

In a press statement on Sunday, IBON Foundation described Lichauco as “a staunch anti-imperialist and progressive thinker, not just during the heady anti-colonialism of the 1950s and 1960s but throughout the so-called era of globalization since the 1980s until today.”

His support for the idea that Philippine national development is impossible under conditions of foreign economic and political domination is affirmed by the country’s continued underdevelopment, added IBON.

In the 1950s, Lichauco worked with the nationalist icon Claro M. Recto in the Nationalist Citizens’ Party. By the 1960s he was among the “distinguished nationalists who formed the Movement for the Advancement of Nationalism (MAN),” IBON added, citing as examples Jose Ma. Sison, Lorenzo M. Tañada, Jose Lansang, Renato Constantino, and Francisco Nemenzo, Jr.

Sison also issued Sunday his own tribute to Lichauco, from his exile in the Netherlands.

Lichauco represented the 1st district of Rizal in the 1971 Constitutional Convention and, “for his strident advocacy for national independence against US imperialism, was famously arrested as he left the convention floor and detained in Camp Crame,” IBON recalled.

After his release and throughout the Marcos years, he was a constant presence in nationalist forums and protest actions, and occasionally wrote articles critical of the regime’s policies in, among others, Malaya and WE Forum, forerunners of the Mosquito Press that were published by the late Jose Burgos Jr.

After Ferdinand Marcos was ousted in 1986, Lichauco wrote a number of important books and articles asserting the need for nationalist economics in resolving the problems of mass Philippine poverty and underdevelopment. At this time, he also became a board member of IBON Foundation, composing the first batch of the IBON Board from 1982 to 1986.

From the 1990s until his passing, Lichauco “was consistent in opposing the neoliberal globalization offensive through his writings and sharing of ideas with progressives and activists,” according to IBON.

From the Netherlands, Jose Ma. Sison, who had worked closely with “Ding” since the early 1960s, conveyed his condolences to Lichauco’s family and friends.

“I first came to know Ding when I read his articles criticizing US monopoly domination of the Philippine economy and advocating a policy of national independence and nationalist industrialization.

“I invited him to write for the Progressive Review of which I was the editor-in-chief. When I first met him, I recognized him as one who had been observing the mass protest actions conducted by the Lapiang Manggagawa and the youth who came from the University of the Philippines and other universities in downtown Manila.

“Before I knew him personally, he had been inspired and moved by the same ideas that influenced me. He admired, accepted and supported the anti-imperialist ideas of Claro Mayo Recto in the 1950s and joined Recto’s Nationalist Citizens Party. As soon as I met Ding in his office, we became instant friends because of our common ideas and values, and his modesty and amiability,” Sison recalled.

Lichauco “encouraged the founding of Kabataang Makabayan in 1964” and spoke at the KM Nationalist Lecture Series, recalled Sison.

Ding also helped raise funds to bus in to Manila thousands of peasants from Central Luzon and Southern Tagalog regions for a major rally in front of Malacañang Palace in the 70s.

“When preparations were made for the formation of the Movement for the Advancement of Nationalism (MAN) in 1965 and 1966, Ding was active in the overall preparatory committee as well as in the committee to draft the MAN Program of Action. He was among the most active thinkers and planners, who included Sen. Lorenzo M. Tañada, Dean Jose Lansang, Renato Constantino and Francisco Nemenzo, Jr.,” according to Sison.

At one point in 1967, a disturbed President Marcos invited the MAN National Council to Malacañang as the mass actions of the KM, SPP and the MAN escalated, but according to Sison’s recollection, Lichauco was among those who firmly “stood our ground against the self-serving statements of Marcos.”

After arresting Lichauco as he left the Con-con premises when martial law was declared, Marcos had Lichauco charged with subversion, not just “for his patriotic and progressive activities in MAN” but also, Sison stressed, because of his acclaimed critique of US imperialism, a paper later called The Lichauco Paper and published by the Monthly Review Press of New York.

Despite his consistent opposition to the dictatorship, Lichauco did not jockey for any position in the Cory Aquino government post-EDSA.

This, despite academic credentials and experience beyond reproach: a B.A. in economics from Harvard College, and a Bachelor of Laws from Harvard Law School. Among other stints, Lichauco was a policy director of the Philippine Chamber of Industries, director of the Institute of Economic Studies of Araneta University, senior consultant to the Congressional Economic Planning Office, and head of the policy research department of the National Economic Council (now NEDA).

It wasn’t surprising Lichauco had no role in the post-EDSA regime, noted Sison, because “the new rulers” had no use for an “anti-imperialist advocate for national independence and genuine economic development through nationalist industrialization and land reform.”

Indeed, Lichauco “manifested and proved by word and deed his conviction, wisdom and competence as a patriotic and progressive Filipino, ever concerned with the rights and welfare of the Filipino people,” Sison said.

The works of Alejandro Lichauco, he concluded, “shed light on the problems that we face and the road that we must traverse in order to achieve full national independence, democracy, economic development, social justice, people’s solidarity and peace.”