Pacquiao says no one but God can judge ex-Pres. Marcos 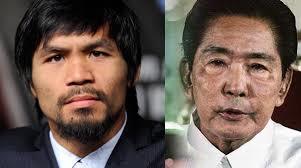 Sen. Manny Pacquiao, during Monday night’s episode of “Bawal ang Pasaway kay Mareng Winnie”, said that there was nothing wrong with burying the former President and dictator Ferdinand Marcos in the Libingan Ng Mga Bayani because no one but God was in a position to pass judgment on the late strongman.

He also believed that Marcos’ dictatorship and eventual ouster did not disqualify him from interment at the LNMB. Rather, Pacquiao argued, Marcos became dictator only after he became president, and being elected president qualified him for the LNMB.

Critics responded angrily to the surprise burial of Ferdinand Marcos at the LNMB, with a spontaneous protest held at the People Power Monument along EDSA.

Another, thousands-strong “Black Friday” protest was also held at the Luneta on November 25, with another such demonstration scheduled for November 30.