If you think Ferdinand Marcos was the best president the Philippines ever had because he allegedly built a slew of infrastructure that are still used today, think again.

“Past is past,” you might say, “Let us forget, forgive and move on!”

Move on, if you must, but one thing is for sure though: Filipinos cannot yet move on from paying the debt Marcos incurred to construct his projects. It is still questionable if these buildings’ use outweighs their cost and the expenses of renovating them.

World Bank and International Monetary Fund (IMF) records show that most of Marcos’ infrastructure projects were funded by loans that jacked up the country’s foreign deficit from $360 million when Marcos came into power in 1962, to around $28.3 billion when he stepped down in 1986. While borrowing for sizeable projects could have been a wise move, many of the projects were rushed, so they are not safe for long-term use.

Economist Emmanuel de Dios and colleagues at the University of the Philippines, moreover, wrote in 1984 that the bulk of construction projects were “not very productive and many were outrightly wasteful.” While some have cultural value, other projects would be “over-designed bridges, highways, public buildings or large energy projects designed to secure a political constituency, to get a commission, or to corner a contract.”

According to expert estimates, it will take the country up to 2025 to fully pay the debt, almost 40 years after the EDSA People Power Revolution. Marcos and his allies allegedly overpriced the projects to be able to pocket billions of dollars in kickbacks, which Filipinos are still paying for.

Cultural Center of the Philippines (CCP) Photo by Cultural Center of the Philippines

“As the state became the new patron of the arts, the cultural sphere became Imelda’s power base,” Gerard Lico writes in the 2003 book “Edifice Complex: Power, Myth, and Marcos State Architecture.”

“To assert this obsession with identity and promote the image of the nation as a progressive economy in the third world, the first lady built the Cultural Center of the Philippines, a cultural convention facility on land reclaimed from the historical Manila Bay. The center was built with money from the Cultural Development Fund, nourished by the Special Fund for Education, which in turn originated from the Philippine War claims from the United States,” Lico said in the book.

A popular venue for international exhibits and performances, the CCP was built in 1966 in Pasay City under Marcos’ Executive Order 30. The 62-hectare complex opened on Sept. 8, 1969.

Since the CCP was allegedly “rushed” by then First Lady Imelda Marcos for the late dictator’s 52nd birthday, the complex had “unpaid obligations” throughout the Marcos regime, which were then paid after the People Power in terms of assets. The complex, as a result, lost some of its land, including the site of today’s Sofitel Hotel, Star City, Coconut Palace and Philippine International Convention Center, or PICC.

Since it was constructed, the CCP is said to be always short in budget, thus, it always pleads for renovation and has to rely on donations and government subsidy to survive. The government recently shelled out another P2 billion for the center’s renovation and extension. 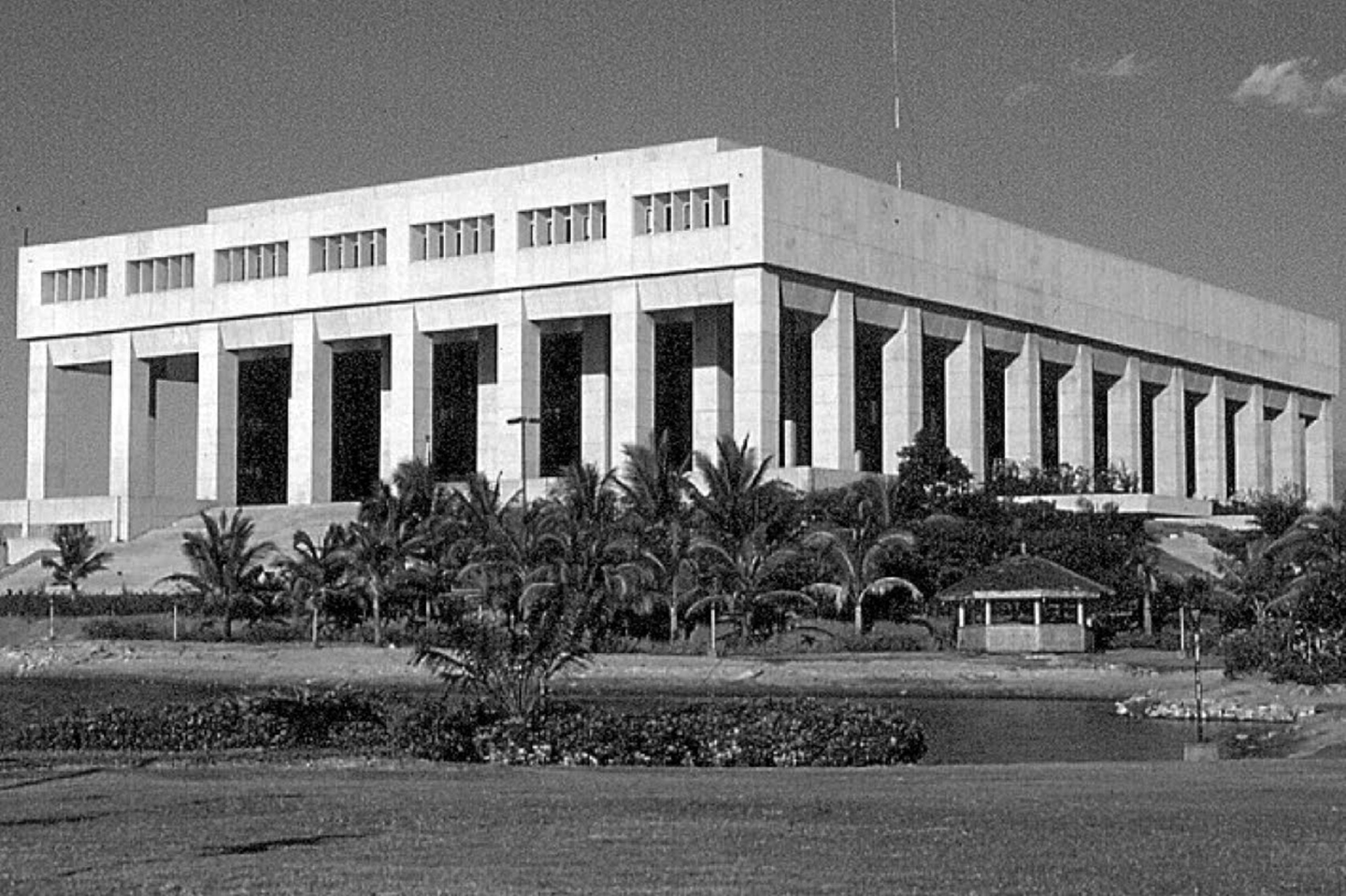 At the southwest end of the CCP was the Manila Film Center, originally built as a national film archive spearheaded by Imelda Marcos.

The deadline for the building’s construction was tight, requiring around 4,000 workers who worked in three shifts non-stop for 24 hours a day. The lobby, for example, was only built in 72 hours, when it should have been erected in six weeks.

At about 3 a.m. of Nov. 17, 1981, the center’s scaffolding collapsed, burying around 169 workers alive in quick-drying cement. The Marcos administration tried to cover up the accident by not permitting rescuers and ambulances into the site not until nine hours after the incident. Marcos believed that to meet the country’s energy demands during the oil crisis in 1973 and decrease its dependence on imported oil, the country should shift to nuclear power.

By March 1975, however, without much explanation, Westinghouse’s asking price ballooned to $1.2 billion. Soon, it was reportedly discovered that Westinghouse sold the same technology to other nations for only a fraction of the price it billed the Philippines.

The BNPP was then started to be built in 1976. Three years after, following the Three Mile Island incident in the US, construction of the nuclear plant was halted. According to a safety inquiry into the plant, it has over 4,000 defects that include being built in a major earthquake fault line and its close proximity to Mount Pinatubo. Throughout the ’70s and ’80s, the plant had been protested for its potential threats to public health and safety.

When the plant was nearly complete in 1984, it had cost the government US$2.3 billion. The country was only able to pay it off in April 2007—30 years after its construction.

When Marcos was overthrown in 1986, in April of that year, the Chernobyl disaster happened, prompting the succeeding Corazon Aquino administration to discontinue the plant. The government sued Westinghouse for the supposed bribery and overpricing, which were rejected by the US court.

Repaying the debts incurred for the plant became the Philippines’ obligation. The next administrations tried finding uses for it. There were proposals to convert it into a power station for oil, gas, or coal, but constructing new power stations had been less costly than holding these in the plant.

In 2016, after an inspection by Philippine senators, the plant has been found to have over 2,000 defects. In the 2000s, a Korean corporation’s assessment found out that it might cost the country another US$1 billion to rehabilitate the plant.

Solar, wave and wind power were also found to be cheaper than nuclear power as alternative energy sources, so the plant’s usefulness today or in the future remains questionable. Originally a part of the CCP complex, the PICC was touted as Asia’s first international convention center that has been hosting local and foreign meetings and conventions.

Like the CCP, it has degraded, with many parts no longer or rarely used. It is no longer owned by the CCP because it has been used to repay part of the debts the CCP has incurred during the Marcos era. Commissioned by Imelda Marcos in 1974 for the Miss Universe competition in Manila, the Folk Arts Theater was designed to seat 10,000. Today, it is still being used as a theater although it should have been torn down a long time ago since it was done in a record time of only 77 days. Photo by Manosa and Company

According to Lico, Imelda wanted a house that would embody everything Filipino in terms of design, philosophy, material and execution. Thus the Tahanang Filipino was erected in 1981.

A homage to vernacular and modern Philippine architecture, the Coconut Palace was partly funded by the coconut levy, which was supposed to be for the development of the country’s coconut industry, specifically, for welfare projects for coconut farmers.

“The fund, when audited and placed under government sequestration after the fall of the Marcos dictatorship in 1986, was also found to have been disbursed on such items as a scholarship program by Imelda Marcos, or donated for Ms. Marcos’s pet projects such as the Miss Universe pageant and the World Chess Championship, among others,” Lico adds in his book. Built in 1969, the Nayong Pilipino near the Ninoy Aquino International Airport was a brainchild of Imelda. It ran as a theme park featuring replicas of the country’s tourist spots for 32 years before it was transferred to Clark, Pampanga, where it recently became the subject of an alleged casino anomaly.

In 1873, Ileana Maramag was quoted by Lico as saying: “The question really was to what extent authenticity was compromised in the process of transplantation to Imelda’s theme park.” Completed in 1973, the San Juanico Bridge is the country’s longest. It spans from Samar to Imelda’s home province, Leyte, as it was the late dictator’s birthday gift to her. Found in Mount Makiling, Los Baños, Laguna, the National Arts Center was built in 1976 as a haven for aspiring Filipino artists. The 13.5-hectare property includes a Boy Scouts of the Philippines hotel also tainted with anomaly as former Vice President Jejomar Binay allegedly tried to have the facility under his control.

People’s Park in the Sky People’s Park in the Sky was established in 1981 originally as a guest house for then US President Ronald Reagan, but the visit never pushed through as Marcos was ousted in 1986. It now serves as a park that includes Mother of Fair Love, The Shrine of Our Lady and a weather station of the Philippine Atmospheric, Geophysical and Astronomical Services Administration (Pagasa). Originally known as Philippine Heart Center of Asia, this hospital in Quezon City was built under Presidential Decree No. 673 by Marcos. Since it was inaugurated in 1975, it has been the site of thousands of surgeries, including what was claimed to be the first successful renal transplant in the country.

In 1975, Maramag, as cited by Lico writes that the center was Imelda’s “monument to the heart.” The “designer hospital” by Architect Jorge Ramos was finished reportedly to heed to Imelda’s request that the building should be inaugurated on Valentine’s Day. Recently, the institute was under fire as its officials allegedly acquired P750 million worth of specialized medical equipment without undergoing public bidding.

Lung Center of the Philippines Established in 1981 to address health care for lung and pulmonary disease, this hospital in Quezon City was built under Marcos’ Presidential Decree No. 1823. A fire destroyed much of the center in 1988. In 1999, it reopened and is still under construction.

Were the Marcoses really concerned about the arts, health and transportation that is why they built all these cultural centers, hospitals and bridges?

In “Dead Aim,” De Quiros warns that all these are just a facade for the real motive.

“Maybe Marcos truly could not curb his wife’s ‘edifice complex,’ as the press called it, and her constant need for self-advertisement,” De Quiros writes in the book.

De Quiros adds: “But even more possibly, he (Ferdinand) encouraged it, as it diverted attention from the real pillage. The real pillage was not in the taxpayers’ money being frittered away in Roman circuses; it lay elsewhere…The rape and pillage was Marcos’s other compelling reason to want to stay in power…He needed wealth to acquire power, and he needed power to acquire wealth.”

According to De Quiros and Lico, when these infrastructure were made, aesthetics was prioritized over function as these edifices served as a mask to hide the atrocities of the regime, to give the world the illusion that the Philippines was progressive and Filipinos were not living in trees.