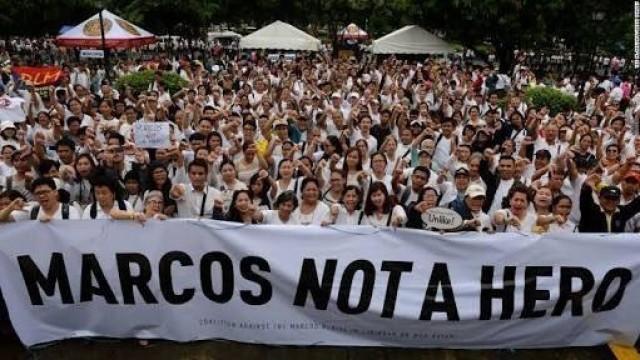 A massive protest action to oppose the burial of the late President Ferdinand Marcos at the Libingan ng mga Bayani will be staged on November 25.

The announcement was made by Bagong Alyansang Makabayan secretary-general Renato Reyes during a press conference at the University of the Philippines-Diliman campus in Quezon City on Saturday.

That day was chosen for mobilization as it coincides with President Rodrigo Duterte’s return to the Philippines from Peru next week after attending the Asia Pacific Economic Cooperation Summit in Peru.

Reyes said they may stage the protest action in one of these venues: Rizal Park, Liwasang Bonifacio and Mendiola in Manila, and in Makati City. However, these are not yet final as they have to secure permits first.

The protest action aims to gather different sectors of the society to denounce the surprise interment of the late strongman at the heroes’ cemetery.

“Kailangan po magpakita tayo ng malaking pagkilos, aksyon, protesta, malawak na pagkakaisa against the Marcos burial, against the revision of history and against Duterte’s alliance to the Marcoses,” Reyes said.

Marcos’ remains were flown from Ilocos Norte to Manila late Friday morning, with the private burial held at noon at the heroes’ cemetery.

As news of Marcos’ surprise burial at heroes’ cemetery spread like wildfire across social media on Friday morning, protesters began to gather in different parts of Metro Manila.

Major protests actions were held along Katipunan Avenue and People Power Monument in Quezon City, along Taft Avenue near Padre Faura Street in Manila, and at the Ayala Triangle in Makati City.