The senator did not graduate with a BA in Philosophy, Politics and Economics, as he claims 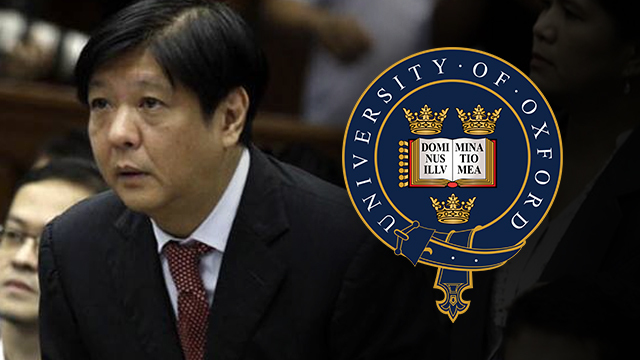 MANILA, Philippines – When Ferdinand “Bongbong” Marcos Jr said he earned a “diploma in political science” from Oxford University, brushing off a Rappler report that he did not complete a Bachelor of Arts in Philosophy, Politics and Economics (PPE), he failed to get two things right.

First, he misremembered the name of the diploma he acquired. It was a “special diploma in social studies,” not political science.

The spokesperson for the University of Oxford, Clare Woodcock, said in an e-mail:

‘We can confirm that a Ferdinand Marcos matriculated at the University of Oxford in 1975 to read for a BA in Philosophy, Philosophy and Economics. According to our records, he did not complete his degree, but was awarded a Special Diploma in Social Studies in 1978.’

This e-mail was addressed to Matthew Montagu-Pollock, a graduate of Oxford University, who, after reading the Rappler report, made his own inquiries. Montagu-Pollock shared Woodcock’s email with us.

Montagu-Pollock explained in his post in the Rappler comments section that “matriculated” means “began the course.” He continued: “Bongbong…instead left [Oxford University] with a diploma, which is not, in fact, a degree.”

We then clarified with Robert Wilkins, a tutor at St Edmund Hall, the college that Marcos Jr attended, what this “special diploma” was all about. He told us in an e-mail:

‘The Special Diploma operated before my time here, but my understanding is that it was a two-year course that provided a foundation for subsequent study of PPE at the Finals level. It is no longer offered by the University.’

Both Woodcock and Wilkins are clear on the crux of the issue: Marcos Jr did not obtain a BA. He did not complete a degree.

We emailed the Oxford University spokesperson to ask what the criteria are for special diplomas. We have yet to receive a reply.

However, a contemporary of Marcos Jr at St Edmund Hall explained: “My understanding is that the special diploma was something given to students on the rare occasion that they failed their first year preliminary examinations and hence disqualified themselves from going on to receive a Bachelor’s degree.”

Similarly, a student from the UK who made his own inquiries e-mailed us: “This could be for someone who didn’t have good enough academic qualifications (A levels) and who would therefore not be offered a place on a full standard undergraduate course. It would set a bad precedent by lowering standards…a bit like a special diploma for ‘special needs’ students.”

“It was possibly a back-door method…a political accommodation,” the student added.

Diploma not a degree

Second, Marcos Jr equates a diploma with a degree, an apparent attempt to fudge the facts. “I got a diploma!” he told reporters. “What do you get when you graduate? A diploma,” he said.

In the UK educational system, a diploma is not equivalent to a degree. The University of Oxford Department for Continuing Education is explicit:

A student from a UK university told us that “anyone who only has a diploma did not complete the 3-year degree course, did not take the exams, and therefore has not been conferred a BA.”

A graduate of Oxford, who commenced with Marcos Jr at St Edmund Hall, put it sharply: “Essentially this means that Marcos is a college dropout, in the sense that he has not completed a degree to Bachelor level.”

Marcos Jr has not corrected his resumé, as posted in the Senate and his own websites.