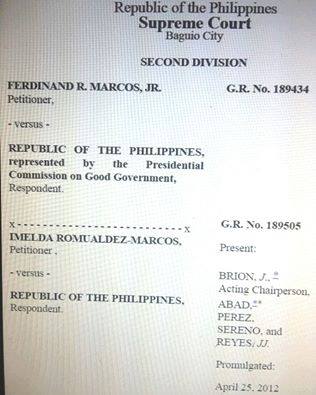 In “Ferdinand Marcos, Jr. vs. Republic of the Philippines”, G.R. No. 189434, April 25, 2012, you will learn that the Marcos children, including Bongbong Marcos, signed several Compromise Agreements with the PCGG all dated 28 December 1993 where they admitted holding US$356 million in Swiss accounts which the Swiss government eventually ruled to be ill-gotten.

However, when the Republic of the Philippines filed on 18 October 1996 to forfeit the $356 million, true to form, sneaky Imelda Marcos disowned the Compromise Agreements claiming she was not a party to it. More importantly, she admitted that she owned 90% of the funds while the remaining 10% belonged to the Marcos estate. A damning admission of ownership of the unbelievable amount of US$356 million.

Unrepentant Plunderers! The Marcoses have no shame. They lie to our faces, use the very same plundered funds to pay off trolls, loyalists, pr men to spin their web of lies!

The SC case can be accessed through these links:

—
The US Court of Appeals on Wednesday wrote that the “$100,000 per day amount was necessary and appropriate because the Marcoses’ contumacious conduct” caused direct harm to the victims, by preventing them from collecting on their $2 billion judgment.

—–
4 CASES WON AGAINST THE MARCOSES:

Excerpt:
“Next time you see a Marcos loyalist post on Facebook or Twitter that no Marcos has ever been convicted in court, you can point out to them that the Marcoses have lost at least FOUR landmark cases in court –
1- the case in Switzerland involving their Swiss loot;
2- the mother case in Manila forfeiting the Swiss money and other stolen assets in favor of the Philippine government (the decision was penned by the late Chief Justice Renato Corona when he was still an Associate Justice);
3- the class action suit filed by human rights victims in Hawaii;
4- and the separate tort case filed by Agapita Trajano over the torture and murder of Archimedes.”

US COURT upholds damages against Marcos